A Viewpoint on Libertarian Society 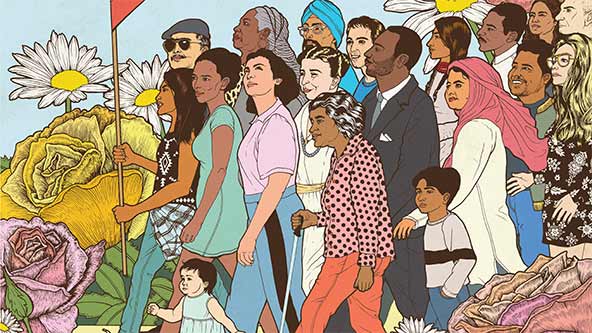 Libertarianism as an idea has often been misconstrued and labelled as a utopian thought not just by its critics but also at times by its own proponents. Produced below is a piece published in the May 1958 issue of the Indian Libertarian magazine where the author James Kielty deconstructs the vision of a libertarian society. ( Image : Art by Celeste Byers)

The tendency on the part of even libertarians to confuse libertarianism and utopianism is regrettable for libertarianism can only be conceived of as an acceptance of the problems of human existence, and willingness to share in these problems and to take responsible action without supposing that any action will provide more than a temporary solution.

Libertarianism, in other words, attempts to relate, at all times action to reality rather than imposing an institutional form upon ideas that can only at certain point and instance correspond to reality. Any one who is flippant enough, at this point, to ask what is reality, has missed the essential point. Reality has no verbal equivalent and this makes institutionalising process an idiotic one since verbal construction such as laws. mandates, and dogmas cannot correspond to something that is non-verbal and obviously highly unstable.

For the same reason, its achievements would be enormously difficult and its “Stability” (a word that probably should- never enter into the discussion ) at all times threatened. That again, however, is an essential point. There could never be a libertarian society without a general acceptance of responsibility and a general sharing of power. If a majority of society wished to shun responsibility and hand over power to a minority that wanted it, libertarianism would cease to exist as a social or quasi political system.

While a democratic society is a step on the road to libertarian society, its institutional and legal framework ensures its decay and corruption as each individual becomes increasingly a victim rather than partiCipant in the society’s encumbrancing framework. At present “democracy” consists of a great number of organised groups exercising pressure for or against specific rather than universal aims.

A libertarian society would require a whole group that was essentially aimless. It would require a whole group that would have no truck with the concept of “hope”, that would act on the basis of substituting for the intolerable the less intolerable rather than acting on the basis of “solving the problem” or “making things right.”

It would not be a society involved in the concept of a “better” world, thereby carrying with it always the immense burden of the “worse.” Rather, it would move and catch from problem to problem allowing circumstances, spontaneous genius and the space of events that we call time to lift it over each hump and out of every depression. It would, in other words, act exactly as we do, but it would recognise that that was what it was doing.