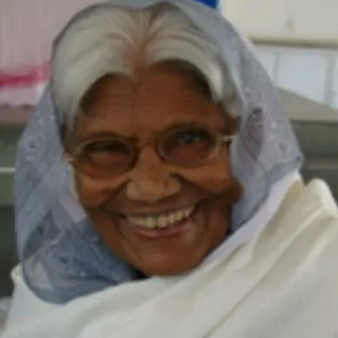 Babytai Kamble was a pioneering voice of intersectional feminism in India. As a Dalit woman, she understood the complexities of caste, class and gender-based oppressions and their overlapping nature. Her life and work provides a critical lens into the intersectionality of feminism.

“It is the woman who is the doer” – Babytai Kamble (Pandit)

Babytai Kamble brings forth the struggles and oppression of Dalit women, who have conveniently been silenced and overshadowed in history. She created a space for herself and her community in the world of literature, activism and education. She did so through the standpoint of a Dalit woman, a rarity at the time. Her take on feminism within the multi-layered oppressions of class, caste and gender create a space for intersectionality.

A teacher, entrepreneur, human rights activist and a champion of women’s rights, Babytai Kamble’s life becomes an example of purposeful determination. An inspiration to many women, Kamble herself was inspired by the life of Dr B.R. Ambedkar and the contributions he made to the Dalit community. Taking his beliefs and morals forward, Kamble not only became a torchbearer of Ambedkar’s values and motives but also created her legacy by paving the way for Dalit women in the realms of activism and literature.

Kamble was born as Baby Kamble in the year 1929. She was given the name Babytai by her peers and supporters out of affection and adoration. A member of the Mahar community, one of the largest marginalized communities in Maharashtra, Kamble began her activism at a young age. She began going to public meetings that were organized by various Dalit activists that inspired her to work for her community.

The meetings primarily focussed on emancipation of the marginalized communities. The prime ideas discussed in these meetings acknowledgement of violations of human rights, absence of fundamental individual rights,  and ways to implement these rights for the betterment of disadvantaged communities. In one such meeting, an activist portrayed women as leaders, which struck a chord with young Kamble. As per societal norms, women in the forefront of was a rare sight. Therefore to hear about the possibility of a woman being in a leadership position encouraged Kamble to follow the same path. These meetings led a lot of women within the community to actively take part in public life. It encouraged them to fight for their rights.

Kamble was married off at the tender age of thirteen, which was considered old in those times. Surrounded by poverty and unemployment, it was extremely important for Kamble and her husband to get jobs. Owing to the restrictions the upper caste community bestowed upon them, it was extremely difficult for anyone from the Mahar community to get a job. Therefore, Kamble and her husband both started a small business selling grapes. Slowly, they started making profits off of their business, which helped Kamble to support her family financially. This not only gave them the economic agency that was much needed but it also brought out the entrepreneur in Kamble. Her ideas and motives with regard to the business gave her the agency which most women were not allowed to access.

Kamble soon became a part of the Mahila Mandal that Raja Malojiraje Nimbalkar and his wife Lakshmibai formed in Phaltan, Maharashtra. The Mahila Mandil focused on Dalit women’s right to education and employment. Since her father had never allowed her mother to take part in public meetings and gatherings she made way for herself and became a member of the Mahila Mandil. She alongside other members of the organization fought for social equality for their community. In these meetings, they also took part in various deliberations in regards to women’s emancipation. Kamble also ran an ashram for children of the disadvantaged and vulnerable communities that focused on the overall growth and development of those children through education. Being an advocate of human rights, Kamble wanted to pass on the same ideas of social equality and enlightenment to the children of her community. To be aware of one’s social rights at a young age is not only important for the emancipation of one’s community but also for the development of the individual self. By imparting her ideas and motives to the children of the ashram she was not only creating a safe space for them but also giving them the scope to be independent, something that she believed was crucial for one’s individuality.

While selling grapes at her shop, Kamble often used to read stories and narratives from the newspapers she used for packaging. In those stories, the lack of representation of the marginalized, especially Dalit women encouraged her to pen down her own lived experiences. Through extensive reading, note-taking, and utmost secrecy from her husband, Kamble’s autobiography, Jina Amacha (The Prisons We Broke) was born.

Through her book, Kamble made a significant achievement in the world of literature. Her book sheds light on the oppression of Dalit women, which lacked in mainstream narratives of literature. Being a woman from a marginalized community doubles the oppression through the virtue of gender and caste. The identification and acknowledgment of the layers of oppression Dalit women face becomes crucial to achieve individual fundamental rights. Kamble was not scared of being critical of her community when it came to the patriarchal subjugation of women. Dalit women are indeed doubly marginalized as they are not only subjected to the humiliation of the upper caste community but also from men of their community.

Kamble’s autobiography becomes a way of reclaiming her identity as a Dalit woman. Not being allowed to read and write by her husband and often subjected to physical violence if caught in the acts of education, Kamble created a space for herself in a male-dominated world. The mere process of writing becomes an act of resistance from the atrocities and enormity of the world. By documenting the lived experiences and narratives of her community and individual self, Kamble creates a space for herself not just in the context of Indian literature but also Dalit history. The experiences of marginalized communities which have often been ignored and disregarded by history find room through her work.

Her autobiography becomes an important landmark in Indian literature as it not only throws light on Dalit experiences and narratives but specifically carves space for Dalit women’s lived experiences.

She also published a collection of poems in Marathi titled Man Bolata. It mainly focused on the teachings of Ambedkar and the emancipation and empowerment of the Mahar Community.

Kamble passed away in April 2021, leaving behind a legacy of freedom and equality. Her teachings, motives, and beliefs of education, unity, and morality become foremost to achieve intellectual freedom. She firmly believed in the urgency of young intellectuals who’d be responsible to bring significant change in their lives as well as in the lives of their community. Her ideals and beliefs help us to understand feminism on liberal ideas in a different context. A context which is seldom ignored and silenced. Her experiences as a Dalit woman – reclaiming her agency through entrepreneurship, activism and her biography puts light on the multi dimensional aspects of feminism. It forces one to think about the multifacetedness of narratives and that to visualize those narratives becomes the need of the hour.

Naina Ojha
Naina is a writer from Ghazibad, Uttar Pradesh. She is pursuing a Master’s in Gender Studies from Ambedkar University, Delhi. If she is not frantically typing on her computer to meet a deadline, she is probably sipping on green tea, reading or laughing at her own jokes. She loves books, movies and food. She is also a spoken word artist and has been a part of the community for six years.
Share:
Categories:
Opinions & Events
Content Tags:
Opinions
Related
Related contents and articles.
Related Posts
The Zealous Azizun Nisa
Ramadevi Choudhury’s Unwavering Freedom Struggle
Iqbalunnisa Hussain: A Stalwart of Muslim Women’s Education
India’s Nuclear Ambitions: Minoo Masani as a Liberal Peacenik