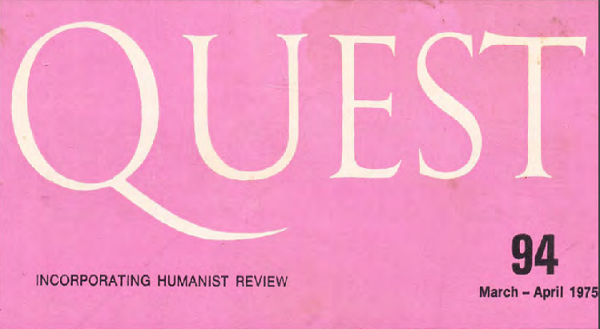 In what could be seen as the unfolding of high modernist ideology, Quest’s criticism took the form of rationalist railing against the religious objection to family planning. In its support of forced family planning and sterilization, the limits of Indian liberalism become apparent in terms of its rationalist high modernity and economic anxiety.

India under the Emergency (1975-77) imposed by Indira Gandhi saw the suspension of fundamental rights, electoral democracy, and press freedom. A recent book aptly calls this authoritarian turn India’s first dictatorship. For the better, the dictatorship had its detractors as well who faced the risk of prison time yet resisted Indira Gandhi’s throttling of India’s audacious democratic experiment. India’s liberal intelligentsia formed a small but significant part of this resistance. One of the major intellectual outposts for Indian liberals during this period was Quest magazine. Published by the Indian Committee for Cultural Freedom (ICCF), Quest sought to advance the cause of cultural freedom and anti-communism in India.

The ICCF was affiliated with the Paris-based Congress for Cultural Freedom (CCF), a covert CIA offensive to counter Soviet propaganda in the Cultural Cold war. Broadly speaking, the Cultural Cold War was a global competition between the Free World and Socialist Camp to win the heart and minds of people by way of covert/overt propaganda and soft power operations. India as a non-aligned nation fit into the CCF scheme of things so much so that the second CCF conference was organized in Bombay. Subsequently, ICCF was formed under the tutelage of a broad anti-communist tent, comprising Jayaprakash Narayan, Minoo Masani, Asoka Mehta, and A D Gorwala. Initially, the group launched Freedom First magazine in 1952, edited by Minoo Masani. But Masani’s sharp anti-Nehru editorial line in Freedom First made the Paris-based CCF secretariat uncomfortable. For Michael Josselson at the Paris headquarter of the Congress for Cultural Freedom, antagonizing Nehru would only make the job difficult for CCF in India. Nehru had already made clear his dislike of foreign propaganda efforts in India trying to affect his government’s foreign policy. Consequently, soon followed in 1954 the CCF decision to launch another Indian magazine which was less political and more literary in its tone. Quest, thus, officially arrived in the Indian public sphere in August 1955.

By 1975, when the Emergency was declared, it was pretty clear that Quest’s impact on Indian public discourse had been minuscule. Published in English which largely remains the language of upper-class elites in India, the magazine had limited circulation and was seen as a tool of US propaganda by the left-leaning Indian public intelligentsia. During the Emergency, historian Eric Pullin has argued, ‘Quest opposed Gandhi’s policies only indirectly, if at all. The few articles that attempted to consider India’s interruption in constitutional government did so generally and theoretically.’ (emphasis mine) Pullin cites a few articles published during the Emergency to make his point. These include the ICCF statement on censorship, Rajni Kothari on the crisis of India’s representational system, and the Pavnar resolution on restoring democracy in India. However, a more detailed perusal of articles related to the Emergency published in Quest would make a plausible case for Quest’s clear oppositional stand on the Emergency.

The September/October 1975 issue of Quest published the ICCF Executive Council’s resolution on censorship. As an organization dedicated to protecting cultural freedom from the totalitarian onslaught, ICCF affirmed its commitment to freedom of expression during the Emergency. In an unequivocal resolution, the Executive Council demanded ‘an immediate revocation of the pre-censorship regulations and the restoration of the freedom of the press.’ In another article on the contemporary situation in the same issue, Daya Krishna sounded alarm on the future of democracy. He saw in the continuation of Emergency the betrayal of hope for liberal democracy’s audacious success in the Third World. Later in the March/April 1976 issue, A B Shah’s editorial on censorship again affirmed ICCF’s commitment to freedom of expression and steadfast opposition to the Emergency. In a clear reference to Emergency’s press censorship provision, Shah argued if the press is in chains, ‘it can neither be healthy nor uphold democracy.’ He also reminded Indira of his father’s commitment to absolute press freedom that he made in a speech in 1950: ‘I would rather have a completely free press with all the dangers involved in the wrong use of that freedom than a suppressed or regulated press.’ Shah’s no-hold-barred editorial raised objection over government authority threatening the indomitable A D Gorwala whose journal Opinion was scathingly critical of the Emergency. Quest’s fearless editor made it clear that his publication was ‘‘prepared to face the consequences’ of our action.’

Quest’s November/December 1975 issue published political scientist Rajni Kothari’s incisive speech that indirectly situated Indira’s Emergency in the long context of centralization of power under India’s centralized administrative state. Kothari argued that the centralization of power in the bureaucratic executive machinery had come at the expense of party organization and evaded democratic accountability. This centralizing tendency was further exacerbated by the planning model of economic development and endemic political instability in states which necessitated control from the high command. As Pullin has argued, Kothari’s remarks could be seen as an indirect swipe at excessive centralization that was a core feature of the Emergency.

The pages of Quint also saw an interesting debate on the Paunar statement on the Emergency which is understandable given the influence wielded by Vinoba Bhave. A meeting of public intellectuals called the All-India Acharya Sammelan saw the discussion on the current situation of democracy suspension. The gathering demanded a return to democratic normalcy but in a balancing attempt also praised ‘constructive developments’ of the crackdown on hoarding, the decline in the labor and student unrest, and check over inflation. However, in a clear stand against draconian trampling of fundamental rights, the resolution decried the arrests of political activists, curtailment of civil liberties, and press censorship.

The conference resolution also called for constitutional amendment enacting fundamental duties for citizens, recommended curb over rich consumption, paid obeisance to Gandhi’s trusteeship doctrine, worried about population explosion, suggested Bhave’s mantra of self-restraint as the solution, decried ‘directionless’ science which can only be saved by an infusion of spirituality. The notable participants of the conference included Hindi literary figures like Jainendra Kumar and Kamil Bulke, former bureaucrat Tarlok Singh, economist P R Brahmanand, and BITS, Pilani director C R Mitra. The Paunar resolution instigated a vigorous debate in the pages of Quest. In his editorial, A B Shah endorsed the Paunar resolution but also made his difference known. Shah’s disagreements were concerned with the dubious statement on science and spirituality as well as the stress on the Fundamental duties of citizens. He, however, appreciated what he saw as the Conference’s unambiguous demand for lifting the Emergency. In the March/April 1976 issue, an author under the pseudonym ‘S’ also objected to parts of the resolution. In an affirmation of liberal constitutionalism, S took objection to the resolution on inserting fundamental duties in the constitution. For the author, a constitution is supposed only to determine the rights of citizens and division of power among state organs. In so far as citizens have obligations to each other and the state, these could be demarcated in the civil and criminal codes. The moral bearing brought by Bhave’s saintly proclivity also came under modern, liberal rationalist attack in the pages of Quest.

Released in May 1976, Quest’s last issue published a detailed criticism of the Swaran Singh Committee’s report. Authored again by S, the article took objection to recommendations including subordination of fundamental rights to directive principles, abolition of the right to property as a fundamental right, inclusion of terms ‘socialist’ and ‘secular’ in the preamble, and curtailment of judicial review. In its affirmation of liberal constitutionalism based on individual rights and separation of power; support to private property rights; and advocacy of judiciary’s check on the executive, Quest’s criticism of the Swaran Singh committee report was clearly liberal in tenor.

Interestingly though, it was on the issue of population control and compulsory sterilization that the Quest lent support to the Indira Gandhi regime. Two articles dealing with the issue, both authored by S and published in 1976, supported the Maharashtra government’s legislative measure mandating sterilization to promote family planning. The justification was provided in terms of lack of natural resources and inability to feed ‘an ever-growing population’. The articles also criticized Muslim and Catholic organizations objecting to compulsory sterilization bid by the Maharashtra government. In what could be seen as the application of high modernist ideology, Quest’s criticism took the form of rationalist railing against the religious objection to family planning. In its support of forced family planning and sterilization, the limits of Indian liberalism become apparent in terms of its rationalist high modernity and economic anxiety.

During the Emergency, Quest published in total six issues, from July 1975 to March 1976. These issues included at least eight articles, editorials included, which were related to the Emergency. Far from indirect and theoretical opposition to Mrs. Gandhi’s suspension of Indian democracy (Pullin’s argument), as the above analysis purports to show, Quest stood for press freedom, lent support to A D Gorwala’s Opinion journal, debated the Pavnar statement on lifting the Emergency, criticized the Swaran Singh Committee report, and discussed the trend towards bureaucratic centralization in India.

To be sure, Quest also lent support to the forced sterilization drive of the Maharashtra government. Yet, instead of facing the wrath of government censor, the editors themselves decided to shut the magazine in mid-1976. Given the fact that Quest was established in 1954 with the mandate to focus less on politics and more on cultural issues, it could plausibly be argued that the journal took a clear oppositional stand against the Emergency, with the support to compulsory sterilization program being the sole exception. Eric Pullin’s study on Quest, thus, warrants revision when it comes to the magazine’s role during the Emergency. However, Indian liberals’ opposition to the Emergency was not only limited to the pages of Quest. Freedom First, another Indian liberal magazine run by enterprising Minoo Masani, played an even more active role in fighting the Emergency.

A classic liberal by persuasion, Sanjeet has a BA in History from Hansraj College, University of Delhi and is currently pursuing his MA in Politics and International Studies from Jawaharlal Nehru University. At Centre for Civil Society, he is the inaugural Indian Liberal Fellow working on the Indian Liberals project of the think-tank. His research interests include but are not limited to political economy, geopolitics, and global history.