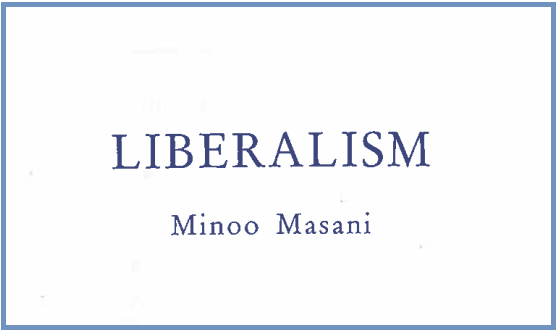 Produced below is part of an essay by Minoo Masani, published in the 1970. The essay was originally published by the Indian Liberal Group, founded by the author.  Among the most prominent proponents of classical liberalism at the time, in this essay, Mr Masani outlines the essentials of Liberalism. The original publication can be accessed on the Freedom First website. Read the first half of the essay here.

Liberalism is making a beginning in India. But this is not the first time that Liberalism has come to India. It came in the 19th century also. There was the old liberalism in India. Its leaders were Dadabhai Naoroji, Ranade, Gokhale, Ram Mohan Roy, Surendra Nath Bannerjee, whose names you know. I saw many of them when I was a boy or a student, attending lectures of Srinivasa Shastri. I remember as a boy playing around the feet of Dadabhai Naoroji at Versova where he was a neighbour of ours. I have seen Dinshaw Vachha. I saw Pherozeshah Mehta. I knew Sapru and Jayakar. They have all gone and the old Liberalism has gone also. It was killed by Mahatma Gandhi. When Gandhiji came on the scene as a dynamic nationalist following Tilak and Lajpatrai, he had no use for the old Liberalism, because the old Liberals were extremely moderate in their opposition to British rule. They were for Indian self-government.

As you know, Dadabhai Naoroji coined the word Swaraj. But the method of fight was very temperate and very moderate. He joined the British Parliament as a Liberal Member. He argued for India, but was a constitutionalist. Liberals are not people who go to the streets, wreck things, attack people and so on. Even today, they are not. So, being constitutional, they appeared to be terribly moderate. As a young man, I was extremely impatient with my father and liberals of that type for being so slow and gentle about the evil of foreign rule.

Even today, I am not against nationalism. I have been a very ardent nationalist in my time. But when we become free, we don’t need nationalism any more. It is like the measles. When you grow up, you don’t have children’s diseases like chickenpox and measles. Nationalism is a disease of foreign rule. When somebody is sitting on your chest, you want independence very ardently. You can’t breathe without freedom and that is as it should be. But when you are free, you don’t have to go on talking about your nationalism. Mature, advanced countries are not very nationalistic. They don’t need it. Go to Switzerland. They are a very patriotic people, but they don’t talk about Switzerland being the most wonderful country in the world! They are wonderful, but they don’t talk about it. So, as we grow up, there is no need to be juvenile about nationalism. Of course, love of the country must be there. When the country is attacked, we must rush to its rescue. We must make sacrifices for it every day. But we don’t want to be chauvinists. We don’t have to hate foreigners. We don’t have to throw out missionaries. Nationalism, while a good thing, has had its day. We can afford to relax on nationalism.

Socialism has failed to deliver the goods. It has produced neither equality nor a better life for the masses of the people. The aims of socialism are good: I am still a socialist in that sense. If you put it to me: “Do you believe in Lenin’s ‘free and equal society’ ” I will say ‘yes’. If freedom and equality are the objectives of socialism, I am for it. But when I find that the weapon that I have used does not create freedom or equality, but creates tyranny and slavery on the one side and inequality and poverty on the other, then I would be a fool if I stuck to that weapon. I am not that conservative that I cling to an out-of-date blunderbuss when the weapon has become obsolete. What I am trying to say is, that the objectives of socialism are still valid, but the methods are lousy. The methods have failed. State planning, nationalisation, collective farming, these are weapons that have been tried and failed and only a stupid man hangs on to a weapon when he knows it can’t deliver the goods. We have to be true to the objective, not true to the method.

This I learnt from Mahatma Gandhi with whom I used to argue as a young socialist. He kept on saying that by doubtful methods, you can’t gel a good end. Ends and means are meshed, interlinked. The end does not justify the means. We have seen from experience that we cannot gel the good result of a free and equal society by injustice, by regimentation, by oppression, by lies.

So the new Liberalism has come to India after the failure of socialism. It is a fusion of western Liberalism and Gandhi. When the Swatantra Party was formed and I was drafting its programme, that is how I put it in an article in Life magazine – that two streams of thought had gone into the making of this effort, Western Liberalism as they understand it plus the teachings of Mahatma Gandhi.

What are these teachings that we graft on to Liberalism or fuse with Liberalism. First, that ends and means are interlinked; that if we want a decent society our methods must be decent. We cannot create a free and equal society by expropriation, liquidation, lying as the communists claim they can. Secondly, as Gandhiji used to say repeatedly, “that Government is best which governs the least.” Minimum government. The essential thing is to leave the people free. Thirdly, Trusteeship, that those who have the good things of life, those who have wealth must use them for the good of the community. While we have a good time with what we have, we must not be devoid of a social conscience or a sense of social obligation. Gandhiji called it Trusteeship of the rich for the poor. He said: let every rich man use his wealth. Certainly, let him keep it. Nobody should take it away. But let him use it so that he can have a good conscience that he is doing what he can for those around who are not so fortunate.

Now democracy has its disadvantages. I am not starry eyed about democracy. I realise its limitations, its corruption, its deficiencies. Winston Churchill was a great democrat. He was asked a question about democracy towards the end of his life. He had tasted both the fruits and bitterness of democracy. He had been in political exile for many years before World War II. He was brought in during World War II, and then he was put back on the scrap heap when World War II was over. This is how democracy works. It is just as well. We in this country don’t place our great men on the scrap heap and that is why we are going down. After giving a little thought, Churchill said: “Of all the known systems of government, democracy is undoubtedly the worst – except for all the others”! That great Liberal in Asia, Carlos Romulo was once heckled by some communist students, in the University of which he was President, who asked him for a declaration of policy. They asked: “Mr. President, are you going left or right?” Romulo answered: “I am going forward”. That is the essence of Liberalism. Neither left nor right, but right ahead.