Sikkim – Through Other Eyes 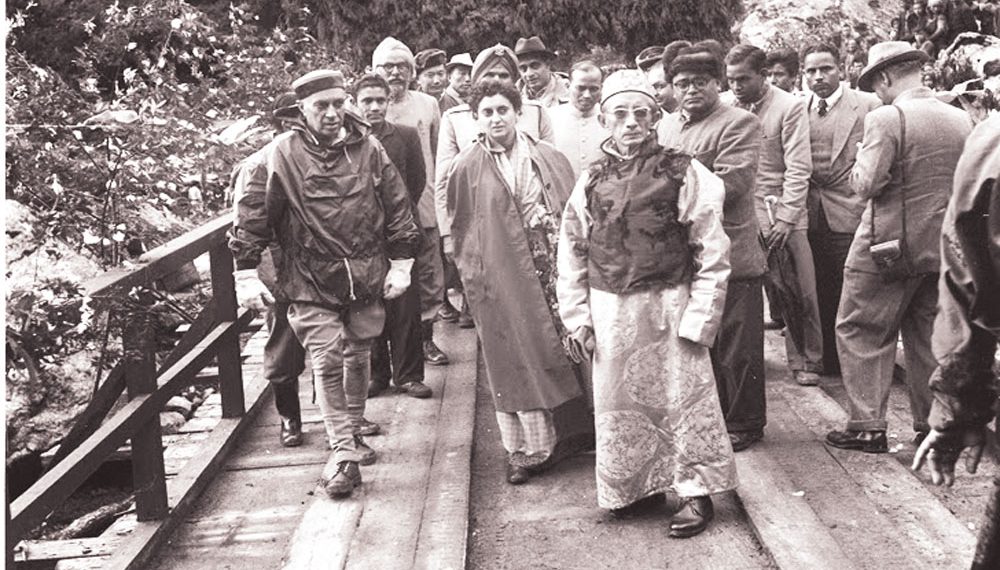 “In 1975, before I had ever had any thought of visiting Sikkim, I followed the events leading up to annexation by India very closely because I could see no justification for the takeover, the abolishment of the sovereignty of the tiny nation of 300,000 people, the rude levelling of their Chogyal, whose dynasty was 340 years old, to the rank of a commoner, and the subsequent house arrest to which he was confined.”

The anti-colonial genesis of Indian nationalism allowed the postcolonial Indian state to position itself as the promoter of the anti-colonial, anti-racist Third World solidarity agenda on International platforms. The most influential and eloquent proponents of this variant of Indian exceptionalism included Pandit Nehru, VK Krishna Menon, Indira Gandhi, KM Panikkar. Periodic paeans to India’s syncretic civilizational heritage and Gandhi’s principles of satyagraha and non-violence buttressed the Indian Foreign Policy rhetoric. However, the imperatives of survival often drove the postcolonial nation-state to pursue the hegemonic policy. Notable examples would include the tensions over Kashmir, Goa, Nagaland, Sikkim, and Punjab where the Indian state applied the prerogative of a sovereign in a manner that contradicted its claim to idealism.

Whatever the underlying motives of the Indian state, the civil society didn’t unequivocally support these actions. Some saw in the Indian deployment of force over its own population or in the neighbourhood the signs of imperial conduct. The most prominent anti-imperialists, not incidentally, were the veteran nationalists, lifelong fighters of India’s anti-colonial movement. The camp boasted the likes of Jayprakash Narayan, C Rajagopalachari, and Minoo Masani.

The triumvirate was unified in its advocacy for a peaceful solution to the Naga question and opposition to the detention of Sheikh Abdullah in Kashmir. JP offered to mediate between the Naga rebels and the Indian state. Rajaji led the delegation to President Kennedy advocating nuclear non-proliferation. Masani objected to the way Sikkim was made part of India and made his displeasure known in public in 1982.

In responding to a reader in the Freedom First magazine, Masani questioned the double standards of his compatriots on the ‘Indian imperialism’, dubbed JP the ‘real anti-imperialist’, and upheld the liberty of people in cases of Nagas, Kashmir, and Sikkim.

Produced below is the article by Minoo Masani.

The other day I received a letter from a regular reader of Freedom First, who happens to be living in another Asian country. That letter contained, along with praise for Freedom First, a challenge which was posed in the following words:

“l have now read twice the two lead articles in the January Freedom First, No, 348, Nissim Ezekiel’s brilliant editorial “Lies About Poland,” and “Betrayal of Poland” by Mr P. N. Irkbi. Both magnificent, forthright, dauntless, moving pieces of writing. I am glad-very glad indeed-that such ringing blows were struck for Poland, and my only wish, if I may be granted a wish, is that these valiant, intrepid warriors would bring their forces to bear in the cause of Sikkim, the tiny, defenceless kingdom that has vanished under the heel of imperialism, not Russian but Indian.”

How are we in Freedom First who have stood for the freedom of all countries without exception to respond to this challenge?

But first let me quote a few extracts from the letter I have received as they stem from deep conviction and anguish:

“In 1975, before I had ever had any thought of visiting Sikkim, I followed the events leading up to annexation by India very closely because I could see no justification for the takeover, the abolishment of the sovereignty of the tiny nation of 300,000 people, the rude levelling of their Chogyal, whose dynasty was 340 years old, to the rank of a commoner, and the subsequent house arrest to which he was confined. I saw no reason whatsoever for India to resort to the same brand of imperialism that Nehru and others spent years in prison trying to fight, in their struggle to wrest India’s independence from Britain. And now, more than ever after having visited Sikkim three times, I see absolutely no reason for India’s presence there.

“You have in this whole sordid story of political annexation of a sovereign state a perfect example of the double standard that has come to be popularly associated with India in the eyes of the world. Everyone from Mahatma Gandhi to Indira Gandhi loathes imperialism in any form, except of course where India herself can employ it with impunity on tiny neighbouring states.”

A pretty angry indictment which I for one do not feel like contradicting.

When Sikkim was taken over by India in the seventies, I felt quite disgusted. Not being in parliament then, I had no opportunity to voice my protest, but I was glad when Mr. Morarji Desai, Prime Minister of India some years later, admitted that he could not justify the taking over of Sikkim. Unfortunately, he did not feel strong enough to undo the mischief.

Long before the occupation of Sikkim, I had noticed the double standards observed by most of our compatriots on the issue of imperialism. Whether it was in regard to our persecution of Sheikh Mohammed Abdullah or our Government’s activities in Nagaland there was only one prominent Indian who acted like a real anti-imperialist and that was my good friend Jayprakash Narayan. In regard to Kashmir, he formed the India-Pakistan Conciliation Group which still exists in New Delhi with Mrs. Malati Singh as convener. I readily joined that group.

In so far as Nagaland is concerned, I supported JP’s efforts, which finally succeeded in bringing about a cease-fire between the Indian Army and the army of the Nagaland “Republic”. I was able, during my visit to Nagaland as a member of the Parliamentary delegation sent there by Prime Minister Lal Bahadur Shastri, to do my bit in helping Mr Shastri and his Government to bring about a better awareness in Parliament about the case of the Naga people.

So we can say to our reader overseas: “You are right to be angry and we as a nation must, we feel, plead guilty to your charge, but all we can say is that we in Freedom First have never lowered our flag and that our record, whether on Kashmir or Nagaland, is one of which we have no reason to be ashamed. We thank you for having given us an opportunity to speak up for the people of Sikkim.”

The original text can be accessed here.

IndianLiberals.in is an online library of all Indian liberal writings, lectures and other materials in English and other Indian regional languages. The material that has been collected so far contains liberal commentary dating from the early 19th century till the present. The portal helps preserve an often unknown but very rich Indian liberal tradition and explain the relevance of the writings in today’s context.

Read more: SO Musings: The Retreat from Socialism