Statement of the Principles of Swatantra Party 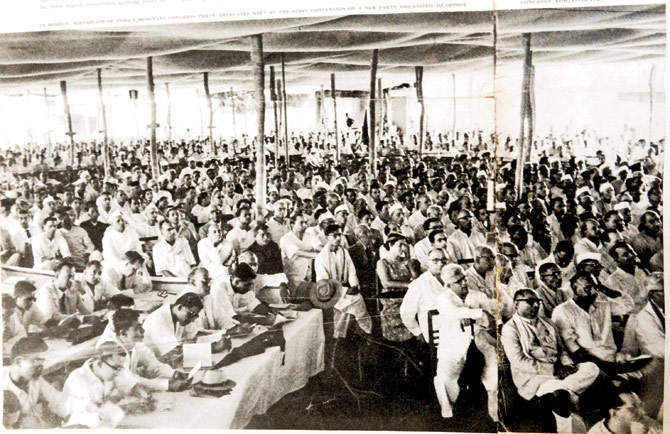 The Statement of the Principles of the Swatantra Party was adopted at the Preparatory Convention held at Bombay on August l and 2, 1959. The 21 principles which were adopted laid the ground for a liberal and market-oriented approach to politics in India. The Swatantra Party was the first political party to openly endorse free enterprise and liberal values in India.

1. The Swatantra Party is pledged to Social Justice and equality of opportunity for all people without distinction of religion, caste, occupation, or political affiliation.

2. The Party holds that the progress, welfare, and happiness of the people depend on individual initiative, enterprise, and energy. The Party stands for the principle of maximum freedom for the individual and minimum interference by the State, consistent with the obligation to prevent and punish anti-social activities, to protect the weaker elements of society, and to create the conditions in which individual initiative will thrive and be fruitful. The Party is, therefore opposed to increasing State interference of the kind now being pursued.

3. The Party holds that the State should foster and utilise the sense of moral obligation, the pride, satisfaction, and fulfilment felt by individuals in serving others, which are inherent in our tradition, instead of adopting legislative or other forms of compulsion which commence with want of faith in the people and are consummated in the serfdom of the governed under the official machine, in an omnipotent State controlled by a political party voted to power. The Party, therefore, adheres to the principle of Trusteeship adumbrated by Gandhiji.

4. The Party holds that the policies of Government should be founded on faith in the people and not on State compulsion and the encouragement of hatred and conflict between class and class, expropriation, repudiation of obligations, and the conferment of more and more powers on the officials of Government at the expense of the freedom of the citizens.

5. The Party stands for every effort being made to foster and maintain spiritual values and preserve what is good in our culture and tradition, and avoid the dominance of a purely materialist philosophy of life which thinks only ·in terms of the standard of life without any reference to its content or quality.

6. The Party holds that steps should be taken to remove the pervading sense of uncertainty that has been created by the present policies of the Government and its varying forecasts of future plans, leading to the drying up of initiative and enterprise in land, shop and factory alike. The Party holds that a sense of stability and incentive for individual effort can be restored only by strict adherence to the Fundamental Rights and Guarantees specified in the Constitution as originally adopted in respect of freedom of property, trade and occupation, and just compensation for any property compulsorily acquired by the State for public purposes.

7. The Party holds that in the policies adopted for national development, priority must be assigned to the basic needs of the people, namely, food, water, housing, and clothing.

8. The Party believes that every citizen has a fundamental right to educate his children according to his choice and in a free atmosphere untrammelled by official directives and that the State should afford facilities for such education without discrimination.

9. The Party holds that the paramount need is for increasing food production and that this is best attained through the self-employed peasant-proprietor who is interested in obtaining the highest yield from his land. The Party believes in an intensive programme of agricultural improvement by promoting the material and psychological inducements for greater production without disturbing the harmony of rural life. The Party holds that there should be no disturbance of ownership, management, and cultivation of land, but believes in a more effective programme than is being followed at present in respect of irrigation, and the supply of material, implements, credit and marketing facilities. The Party believes in the need for giving every kind of help to agriculture, but is opposed to cultivation through organisations which reduce private ownership to an empty paper-title and which bring into being a loose kind of multiple ownership which is certain to sap the incentive of the farmer and his family, reduce output, and take us to a collective economy with official management. It is firmly opposed to collectivisation and bureaucratic management of the rural economy. The Party takes note of the dissatisfaction amongst the rural population that adequate attention has not been paid to their needs. It holds that the level of life of the rural people Should be improved by removing all such impediments as are likely to stand in the way of their attaining a high standard of life and by taking all steps necessary for the purpose, in particular for maintaining a reasonable and steady price for agricultural produce, which is in parity with other prices.

10. In industry, the Party believes in the incentives for higher production and expansion inherent in competitive enterprise, with adequate safeguards for the protection of labour and against unreasonable profits, prices and dividends, where there is no competition or where competition does not secure the necessary corrective. The Party stands for the restriction of State enterprise to heavy industries such as are necessary to supplement private enterprise in that field, such national services as Railways, and the starting of new enterprises which are difficult for private initiative. The Party is opposed to the State entering the field of trade and disturbing free distribution, and introducing controls and official management with all its wastefulness and inefficiency. The Party believes that in the field of production, the free choice of the producer and the consumer must be given basic place and importance.

11. The Party stands for the preservation of the freedom of the small and self-employed artisans, craftsmen, and traders, who are in danger of losing their occupational opportunities, by reason of the policy of Statism. These persons perform a great, widespread, and inexpensive function in our society, and their gradual extinction will be a national misfortune and add to our unemployment problem.

12. The Party stands for greater thrift in public expenditure, It holds that taxation should be kept at such levels as will not interfere with reasonable living standards for the people, both rural and urban, and which, while being necessary and sufficient for the carrying on of administration and such social and economic services as are taken up by the State, is yet not so high and exacting or so ubiquitous as to prevent capital formation and private investment..

13. The Party is opposed to a programme of development based on crippling taxation, abnormal deficit financing, and foreign loans which are beyond the capacity of the country to repay.

14. The Party is opposed to all policies that lead to excessive inflation, high prices that reduce the value of savings, endowments, and fixed incomes, and which create undue hardship for the present generation in the hope of a distant gain.

15. The Party believes that the cost of Public Administration should be reduced considerably. It stands for integrity and efficiency in the services. It is against the expansion of the bureaucratic machine, with a hierarchy of officials asked to do work which is best done by citizens and private agencies, resulting in unproductive waste of national resources.

16. The Party believes that the State will best serve the nation by encouraging and affording facilities for a decentralised distribution of industry and by limiting its own regulatory function to the prevention and punishment of antisocial activities wherever called for.

17. The Party stands for the creation of opportunities for full and lasting employment in all sectors of life. It stands for a programme of all-round industrialisation with a view to developing national resources and reducing unemployment. It believes in a balanced development of capital-goods industries, organised consumer goods industries, and rural industries that afford supplementary employment in the small-scale processing of the products of agriculture.

18. The Party stands for a fair deal for labour, whether in the field, factory or office and for correlating wages to increased productivity and for the workers’ right to organise for the purpose of collective bargaining. It stands for harmonising the interests. of capital and labour when they get into conflict.

19. The Party is opposed to any form of political pressure being put on officials to deflect them from the course of fair and just discharge of duties without discrimination. It stands for the rule of law, an independent judiciary, and for the full play of the powers of judicial review given to the Courts by the Constitution.

20. The Party shall, in all matters, keep before itself the cardinal teachings of Gandhiji, maintaining faith in the people and in the efficacy of truth and non-violence.

21. The Swatantra · Party holds that democracy is best served if every political Party allows freedom of opinion to its members on all matters outside the Fundamental Principles of the Party. It, therefore, gives its members, full liberty on all questions not falling within the scope of the Principles stated above.