The Essence of Democracy 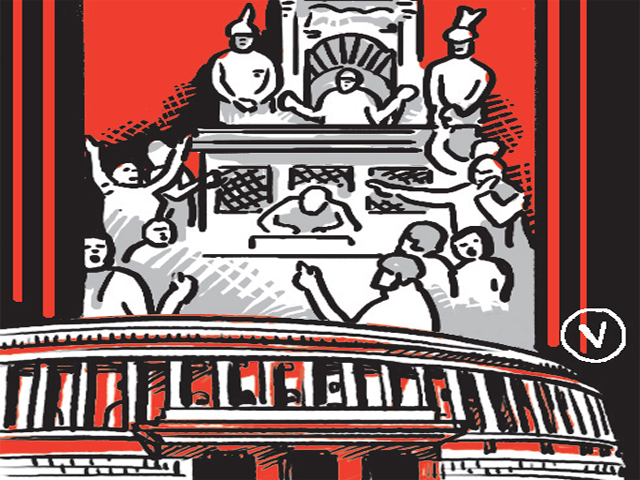 The following piece was published in the August 1953 edition of the Freedom First Magazine. It is an editorial piece written in response to Jayprakash Narayan’s views on democracy as well as the role of opposition in a democratic setup. According to Mr. Narayan, there was no need for an opposition or political parties. The editorial contends with those arguments and presents a clearer picture of democracy and the flaw in Mr. Narayan’s reasoning.

“Perhaps it is a mistake to always imagine that in a democracy there should be a ruling party and an opposition party. There should be some other way…They (political parties) do propaganda and set up their own candidates in elections. People have to select from amongst them. This is not correct democracy. People may not be able this way to select the best worker.” Such were the disconcerting sentiments expressed by Shri Jayaprakash Narayan, the PSP leader, in the course of his whirlwind tour of Gujarat in support of Vinoba’s Bhoodan Movement. Were it not for the fact that our infant democracy is already denounced as a sham and a fraud by those who would forcibly overthrow it in favour of “‘a dictatorship of the proletariat,” we might have taken the criticism in good part as that of a friendly critic who, moved by the misery and suffering of his people, is impatient with the slow and inefficient functioning of an imperfect democratic machinery. As it is, the criticism is liable to be misconstrued by interested parties as a repudiation of the democratic system by one of democracy’s best friends, Let us, therefore, examine Jayaprakash’s pronouncements dispassionately to see how far they are justified.

Jayaprakash begins by questioning the validity of the unstated assumption in the Western concept of parliamentary democracy that there should be an Opposition to the party in power. In reply, we cannot do -better than quote E.F.M. Durbin in his excellent book The Politics of Democratic Socialism. Says Durbin, “If liberty is to exist, if the dependence of government upon the will of the people is to be real, there must always be a real choice before the people. This implies the steady maintenance of a critical and essential institution – that of freedom to oppose the Government of the day. Unless the electorate has more than one possible government before it; unless there is more than one party able to place its view before the country; unless that is to say that the opposition is free to prepare itself to take over power, and the government -to surrender it peacefully after an electoral decision against it; there is no choice before it.” So there ! This is not to say that the duty of the opposition is to oppose everything and propose nothing. But it does unmistakably mean that opposition to the government of the day is of the very essence of democracy.

And yet Jayaprakash thinks there should be some other system. As to what that system should be like, he is delightfully vague. And so we are left none the wiser for all his criticism of what to him is an outdated concept of democracy. In his philosophical peregrination, however, Jayaprakash is not altogether unconscious of the dangerous grounds he is treading. For he hastens to add: “I do not mean that there should be one party administration in the country. This will be suicidal. What I mean is that there should be no party at all. The constitution could be run without any party,” Thanks for the tender mercy !

But without previous agreement on fundamentals how is a non-party administration set about its work? Will it stand for free enterprise, mixed economy or nationalisation? And what will be its foreign policy? We have no quarrel with the ideal of a non-party administration as our ultimate goal. But in the context of the present realities -it is a “consummation devoutly to be wished” but not attainable in the foreseeable future.

Jayaprakash is, however, on surer ground when he says that the restricted choice the electorate is offered in voting for the candidates put up by political parties is not correct democracy, as the voters may not then be able to select the best worker. But here again the fault lies not with the system of democracy but with party politics. Intent upon enforcing rigid party discipline, leaders of political parties prefer docile men who can be relied upon to toe the party line and vote for the party regardless of the issues at stake. Independence of mind is not among the qualities they admire. As a consequence, the sins of party politics visit upon the machinery of democracy, defeating the very purpose of a democratic election which is to put at the helm of affairs the best men with whose general outlook the voters find themselves in sympathy. It is for the party leaders, therefore, to choose as their candidates men of outstanding ability and character so that people may have a chance to vote for them.

To sum up, we believe that the existence of a responsible opposition to the party in power is of the very essence of democracy and that the election of people’s representatives by a vote of the people themselves is the best method of selecting an aristocracy of the ablest and the most outstanding men in the state. So vitally important in any democratic society is this freedom of the people to choose that to deprive it of the freedom would be to drain away its very lifeblood. It is precisely because Jayaprakash’s criticism of democracy impinges upon the freedom to choose that we are provoked to pin issues with him. For if a cat may look on a king, so may in a democracy the editor of a small bulletin cross swords with a leader of Jayaprakash’s stature. And if the leader wishes to attempt a riposte, the columns of this bulletin are open to him. For the editor is a great admirer of Voltaire when he says: “I disapprove of what you say, but I will defend to the death your right to say it.”